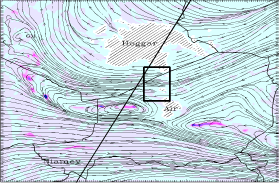 Three-dimensional mesoscale numerical simulations were performed over Niger in order to investigate dry cyclogenesis in the West African Inter Tropical Discontinuity (ITD) during the summer, when it is located over the Sahel. The implications of dry cyclogenesis on dust emission and transport over West Africa are also addressed. The study focuses on the case of 7th July 2006, during the African Monsoon Multidisciplinary Analysis (AMMA) Special Observing Period 2a1.

Model results show the formation of three dry cyclones along the ITD during a 24-hour period. Simulations are used to investigate the formation and the development of one of these cyclones over Niger in the lee of the Hoggar-Aїr Mountains. They show the development of the vortex to be associated with (a) strong horizontal shear and low-level convergence existing along the monsoon shearline and (b) enhanced northeasterly winds associated with orographic blocking of cool air masses from the Mediterranean Sea. The dry cyclone was apparent between 0700 and 1300 UTC in the simulation and it was approximately 400 km wide and 1500 m deep. Potential vorticity in the centre of vortex reached nearly 6 PVU at the end of the cyclogenesis period (1000 UTC).

The role of the orography on cyclogenesis along the ITD was evaluated through model simulations without orography. The comparison of the characteristics of the vortex in the simulations with and without orography suggests that the orography plays a secondary but still important role in the formation of the cyclone. Orography and related flow splitting tend to create Low Level Jets (LLJs) in the lee of the Hoggar and Aїr mountains which, in turn, create conditions favorable for the onset of a better defined and more intense vortex in the ITD region. Moreover, orography blocking appears to favor the occurrence of a longer-lived cyclone.

Furthermore, model results suggested that strong surface winds (~11 m s-1) enhanced by the intensification of the vortex led to the emission of dust mass fluxes as large as 3 µg m-2 s-1. The mobilized dust was mixed upward to a height of 4-5 km to be made available for long-range transport.

This study suggests that the occurrence of dry vortices in the ITD region may contribute significally to the total dust activity over West Africa. The distribution of dust over the Sahara-Sahel may be affected over areas and at time scales much larger than those associated with the cyclone itself.